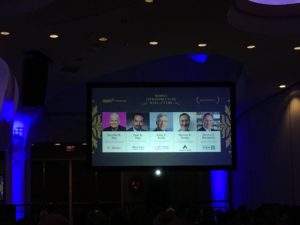 “The event was to recognize pioneers and innovators in the wireless industry, while celebrating the success of industry training and education efforts,” according to the organization’s website.
The honorees included former Crown Castle CEO John Kelly, SBA founder and former CEO Steven Bernstein, T-Mobile Chief Technology Officer and Executive Vice President Neville Ray, Mastec CEO Jose R. Mas and American Tower and former CEO Steven Dodge.
“Tonight, we’re honoring pioneers in the relatively short history of mobile infrastructure,” WIA President and CEO Jonathan Adelstein said at the event. “We’ve grown so fast, that each of them complained they’re too young to be in a Hall of Fame, but like the industry, they’re maturing gracefully.”
Federal Communications Commission (FCC) chairman Ajit Pai was the event’s keynote speaker. Pai alluded to Steve Jobs’ quote, “It just works” when he spoke about the wireless industry. The chairman also noted the wireless industry’s success could be attributed to the hard work being done at tower sites, the $35 billion invested in the market and the engineers who keep the process moving.

“They all began at companies, or started companies, that were relatively small businesses just 30 years ago when the first flip phones came out,” Adelstein said of the inductees. “These five leaders are inducted tonight because of their foresight, their vision, and their tenacity. Each faced down challenges and overcame them all.
“With your support, we’ll build the next generation of wireless networks. Networks that connect our communities, families and schools, keep us healthier, keep us safer and keep our economy growing. Tonight, as we thank the leaders who laid the foundation for our success, we pave the way for the next generation. We’ll meet our customers’ need for more data by having the skilled workers to build more cell sites, and the fiber to connect them all.”