IWG, the world’s largest flexible office space provider, is turning to the franchise model in an effort to fend off industry giant WeWork Cos., The Wall Street Journal reports. The Switzerland-based company, which manages office brands like Regus, Spaces and No. 18, is now asking other businesses to handle leasing and building under franchise agreements. According to The Wall Street Journal, IWG believes the franchise strategy will help it add more locations and expand its network without having to make the large capital investments WeWork has. 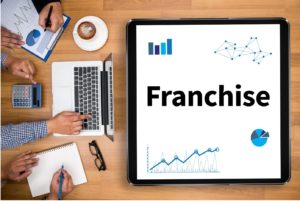 On April 15, IWC announced it would sell its 130 Japanese locations to meeting-room company TKP Corp. for $419 million under an, “exclusive master franchise agreement for the country,” The Wall Street Journal reports. IWG Chief Executive Mark Dixon said last month he wants two-thirds of the company’s locations to be run through partnership agreements—including franchises.
“(Partnering with franchises) enables us to grow more rapidly by using both our capital and their capital to grow,” IWG’s North America CEO Darin Harris said in an interview. Harris also stated, “there’s only so much capital” and that the company planned to add non-franchise locations.
IWG has been the world’s biggest flexible office space provider since it began in 1989. However, WeWork has slowly been gaining on IWG and it could overtake the industry’s top position if current growth trends continue. At the end of last year, IWG operated 547,344 workstations around the world, according to The Wall Street Journal, while WeWork managed 466,000, per a company spokesperson and public disclosures.
IWG executives have said the franchise strategy is not a response to WeWork’s rapid growth however. Despite this statement, people familiar with IWG say executives are monitoring WeWork and have expressed displeasure that they are treated as an afterthought in conversations about the future of the flexible office space industry. IWG’s willingness to franchise is a recent example of how well established public companies can begin to feel like they have to make adjustments to keep pace with well-funded startups that have the luxury of chasing growth even if it means creating big deficits.
“It’s clear that we’re not winning that communication battle looking at how people value us,” Dixon said during a recent earnings call, according to The Wall Street Journal. “Franchising isn’t just a way of improving the company’s return on capital, but also of building an ‘overall message’ that can appeal to investors.”
The article went on to say: WeWork was valued around $101,000 a desk or around $47 billion. IWG, which is profitable and has lived through a number of recessions, is valued around $5,900 a desk or roughly $3.42 billion.
IWG’s franchising efforts started abroad last year and in the United States during the first quarter. It’s not new model however; HQ Global holdings grew by using franchise deals before Regus acquired the flexible workspace company in 2004.
“Franchising within our industry has come and gone, and it’s resurging again,” Frank Cottle, chairman and CEO of the Alliance Business Centers Group told The Wall Street Journal. “One reason is new accounting rules that took effect in January and now require public companies to list long-term leases as liabilities, akin to mortgages or other loans.”
“Financial investors are looking at the balance sheet and saying ‘wow, that’s a lot of debt,’” added John Arenas, CEO of flexible office company Serendipity Labs and former president of Regus Americas. “If leases are signed by franchisees, they don’t appear on IWG’s balance sheet.”
However, Harris said the accounting-rule change, “Did not play a role in IWG’s decision to move into franchising.”
Franchising is not without its risks though. It can be difficult to find good partners and agreements need to be set up so that the franchised offices aren’t competing with IWG-owned spaces. Ensuring quality is a concern, too.
“Ask Marriott and Hilton and Starwood how easy this actually is,” Arenas said. “It’s not a silver bullet for anyone.”