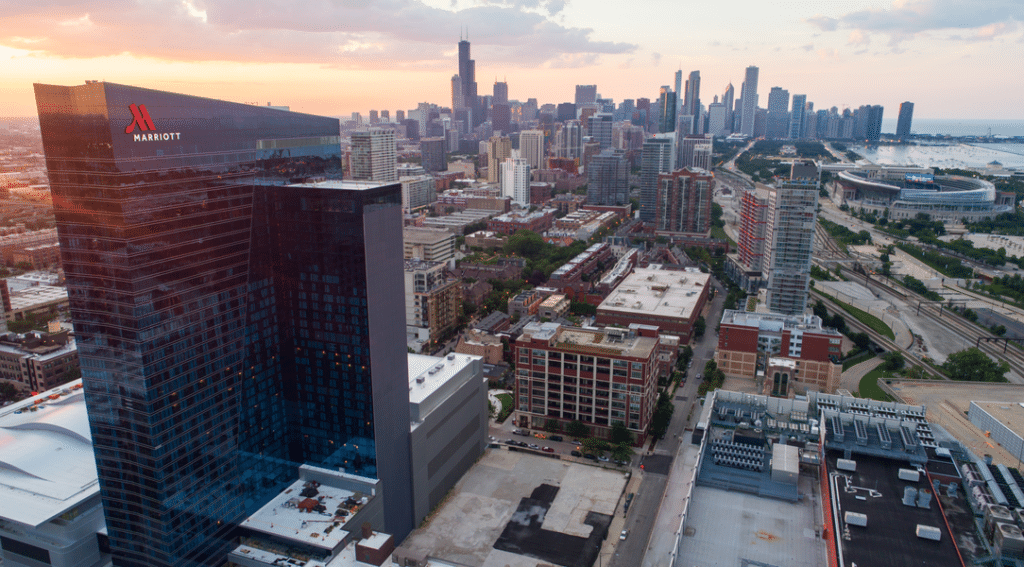 ExteNet Systems has designed a full fiber to the edge network and communications architecture for Chicago’s new Marriott Marquis and Wintrust Arena located in Chicago’s McCormick Place – the nation’s largest convention center complex.
While the project is a dream realized for Chicago’s South Loop neighborhood, transforming the once isolated site into a thriving metropolis of convention-goers, restaurants, and hotels, delivering a 5G-ready fiber to the edge communication infrastructure was no easy task.
In total, the project required delivering a connectivity infrastructure for 1.5 million square feet across a wide range of challenging elements: new construction, a high-rise hotel, a sporting venue, a bridge/pedway, and historic preservation considerations.
“What most people don’t realize is the broad scope of issues neutral host providers like ExteNet address in achieving the requirements from stakeholders and multiple partners,” said Randy Johnson, Director of Technology Evolution at ExteNet Systems.  “Making this project a success encompassed working with the Metropolitan Pier and Exposition Authority at McCormick (MPEA) and Marriott on their brand standards, to choosing the right vendors for construction management and high-level architecture issues, to resolving minute details such as how to get conduit through ceilings.”

The Marriott Marquis
The fiber to the edge installation required outfitting the new 1.2 million square feet  Marriott Marquis Chicago hotel’s 1,200 guest rooms, below-grade parking, retail space, meeting rooms and ballrooms, and in-house restaurant and bar with more than 450 intentionally well-concealed antennas, which are discretely placed to maintain the hotel’s interior design. The build included running fiber up 41 stories on both the north and south sides of the hotel’s interior and an electrical closet every three floors.
“Marriott wanted fully end-to-end fiber. There is no coaxial cable here. Fiber to the edge reduces transmission loss by delivering data closer to the end user. It’s part of Marriott’s path to moving forward to 5G. That was the mindset, concept, and context given to us,” explained Kibrom Tewolde, Director of Indoor DAS Implementation at ExteNet. Tewolde added that, in the near future, he expects more venues to move towards delivering content to the edge.
Designing the architecture for the connecting sky bridge and adjoining five-story landmark building were also challenges. While the majority of the structure is wrapped in glass and translucent materials designed to bring in views of the streetscape and light into the interior spaces, the adjoining five-story concrete landmark structure also needed to be seamlessly integrated during installation.

Communications traffic capacity was the aim in the new 300,000 square-foot arena with 10,387-seats, now the home of DePaul University’s men’s and women’s basketball teams and WNBA team Chicago Sky.
“Capacity was the big component here. Arenas, stadiums, and forums are harder to design because you have capacity at play. Knowing that arenas will benefit the most by the visions of 5G – millisecond end-to-end delays, ultra-fast data transmission, increased spectrum bandwidth – this arena was designed with an eye towards migration to 5G. Carriers’ equipment, fiber, and power are as close to the antennas as possible, with antennas that have narrow beam width and very sharp side lobes serving specific and defined sections by limiting interference from the neighboring sections and increasing the Signal to Noise Ratio (SNR), which is hard to do in multi-sector networks built for capacity purposes,” said Tewolde.
The arena is equipped with 4×4 multiple-input, multiple-output, or 4×4 MIMO key technology to deliver mobile 5G, which groups together antennas at the transmitter and receiver to provide increased data throughput by reducing interference and providing array and multiplexing gains, and the arena bowl has more than 24 antennas intended to serve the seating area alone.
A month-long post deployment capacity analysis was also conducted to optimize the network for optimal traffic patterns and signal delivery of all four wireless carriers.
“We work with wireless carriers in the initial modeling phase to develop criteria for capacity expectations which are put in the contract.  We make sure the network is serving their needs and conduct a one-month testing process which entails optimization of traffic patterns and power needs,” Tewolde added.

The massive DAS head-end room is the location where the carriers’ signal source interfaces with the DAS network. With eleven sectors being delivered to the DAS network to be spread among three venues, this location is almost equivalent to two cell towers that have signal sources from all major traditional wireless carriers. The 2,500 square foot space is fully equipped for ease of carriers with 400A, 480VAC main electrical service provided, stepped down using transformers to provide the carriers their required power needs, and ample room for carrier equipment. It is remotely monitored 24 hours a day.
“We acquire, design, and build the space. The carriers sublet space from us and can build out to their standards. We feed them with power, space, connectivity, and the ample space to do whatever they have to,” said Johnson.
“From the carriers’ standpoint, they don’t need to worry about how to integrate with the network. All they need to do is plugin – we take if from the other side,” he added.