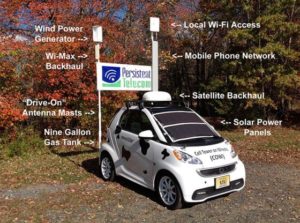 There are places distributed antenna system solutions don’t want to go, and that’s where you’ll find Persistent Telecom.
The company’s in-building small cell solution is targeted at clients that aren’t big enough to justify a DAS system. Persistent’s strength is in its ability to scale down to meet the needs of smaller clients and facilities, said Chris Porto, a spokesman for the Piscataway, New Jersey, company.
In general, DAS vendors aren’t interested in building anything under about one-half-million square feet, said Porto.
“Probably 95% of occupied space from a building or tenant perspective in the U.S. is under 500,000 square feet,” Porto said. “All of those big stadiums and campuses and large office buildings, that market is almost saturated as far as DAS.
“What we’re interested in doing is scaling down for either a building that is off the radar of a carrier to fund a DAS system or even a tenant who is unhappy with cell service in a building — where the property or building manager has decided not to deploy a DAS system. There’s a clear cut off point where we make sense vs. where DAS makes sense.”
Launched as a commercial venture in 2008, Persistent Telecom’s goal was to bring its previous experience gained through numerous government contracts for the military and intelligence communities to the cellphone market. The company provides small cell system integration with commercial off the shelf hardware, to which it adds a virtualized software defined network that can handle 2G, 3G, 4G and LTE technologies and signaling, Porto said. Persistent Telecom also is a mobile network operator that has roaming agreements through global roaming exchanges with more than 400 carriers worldwide.
In addition to targeting enterprises, the company also markets and distributes its in-building small cell solution to public safety, law enforcement and first responder entities.
The company’s unique software combines the components of a mobile network, including base station controllers, networking components that backhaul transmissions to the mobile switching center, operations and maintenance, and accounting, authorization and authentication (AAA.)
“We’ve taken all that and it basically runs in a virtual machine,” Porto said. “We’ve leveraged all of that knowledge and all the engineering we’ve done for the Department of Defense to develop what we think is a winning, scalable in-building solution using small cells rather than distributed antenna systems.”
Porto said the company’s deep roots in the defense market helps it relate well to its public safety, law enforcement and first responder clients because the company is familiar with their protocols and compliance requirements at a high level.
“We are capable of delivering solutions that fit the needs of those types of agencies,” said Porto. “We have the capability of building in access to the public safety, law enforcement and first responder communities for safety purposes during events that cause degraded or non-existent service inside a building.”

In extreme circumstances, said Porto, the company’s small cell network can be used to create an autonomous network inside a building that can create a direct link between responding agencies and building occupants during emergencies.
“If a building owner, property owner, or developer has installed our system throughout their building, and we have a server on site, we are able to turn that building into a standalone cell phone network,” Porto said. “We can actually intercept 9-1-1 calls and direct them to an onsite command center, and we could give broadcast text access to the entire building to the response teams.”
Trends
In an effort to achieve LEED certification, many buildings today are being developed with materials that increase energy efficiency but also block RF signals from the macro network.
“The only way those buildings are going to get cell service is from inside the building,” said Porto. “We install the same way a Wi-Fi access point would install.”
Spectrum rules require that small cell providers obtain rights from each carrier to rebroadcast their signal, a process the company is currently working through.
The company also has its eye on the emerging bring your own device trend, wherein employees bring their own mobile device into an enterprise network environment. With a small cell system, said Porto, enterprises could offload extra traffic introduced via personal devices through the carrier’s network rather than maintaining it on their internal networks. This allows enterprises to create new business models and workflows, including local breakout of traffic, without having to scale up their networks, he said.
Another market trend the company is focused on is encouraging carriers to accept third-party extensions of their networks through managed service provider arrangements.
“It’s not necessarily the same model as a DAS neutral host, but more of model where you can use the access point as the signal source and deliver user and control traffic back to the carrier via IP,” Porto said.
However, carriers are traditionally resistant to sharing network and spectrum resources, he said.
“Carriers are very good at designing, building and operating their networks,” said Porto. “The problem comes in inside a building. The ability for carriers, just from a capital expenditure perspective, to cover all the places that their subscribers are going to be and deliver capacity those subscribers are going to want is completely limited. There’s no way they could ever invest the money on their own to do it.”
A managed service provider model can help carriers reach customers everywhere they live, work and play, said Porto.
“We can enter into these agreements as a managed service provider on behalf of the carrier and we can help with coverage and capacity extension into the customers who need it the most,” Porto said.
Looking to get the latest information about  Wireless Infrastructure, 5G, Smart Buildings, IoT,  and Small Cells  or just want to see what we’ve been following throughout the week, we’ve got you covered. Subscribe Here to receive our weekly Newsletter.
If you enjoyed this article consider reading here.