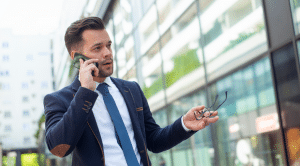 Mobile device use is one of the primary reasons commercial real estate owners have the task of providing tenants with reliable wireless connectivity. A reliable network allows tenants to use their mobile devices to send emails, stream videos, send and receive text messages. Even, gasp, make phone calls.

Yes, people do still talk on their cell phones. That fact has not changed—how they talk on them has somewhat though. According to a recent Wall Street Journal article, Yahoo! Labs conducted a study to see how teenagers use video chat. What they found was subjects liked to multitask while they talked with friends. They’d turn on a video chat and put their phone somewhere, according to Yahoo! principal research associate Frank Bentley.

“They’d basically use it as open audio because the camera would just be pointing at the ceiling,” he told The Wall Street Journal.

“Open audio” is not that far off from making a phone call, but under the guise of video chat, the conversation seems less impolite to people, according to Bentley.

“It’s almost seen as rude to call someone,” he told The Wall Street Journal. “It’s as if they’re saying I am going to disturb someone and make their phone ring and interrupt them and force them to pay attention to me.”

The hesitation to call someone doesn’t just apply to teenagers . According to consumer-research firm MRI-Simmons, talking was the most popular way to communicate with a cell phone in Fall 2012. Ninety-four percent of MRI-Simmons’ survey respondents said they’d use their cell phone to talk during the prior week.

Fast-forward to spring 2019, where talking was the least popular cell phone communication method. Only 45% of survey takers said they used their phone to talk with someone in the prior week. The standard call came behind texting, email, posting to social media and using chat apps in the survey. Wall Street Journal reporter Katherine Bindley noted multiple people she interviewed for the article said they assume someone died when their phone rings unexpectedly.

However, there are app developers and investors who believe voice communication over the phone is not the issue. Making the phone call is the problem. They’re betting voice communication will supplant text again. Especially with advancements of smart speakers, wireless earbuds,and the aforementioned video chat.

“Calling is fundamentally broken,” Alex Ma, co-founder and CEO of the company behind audio-chat app TTYL (Talk To You Later), told The Wall Street Journal. “We went from landlines to the iPhone X but we haven’t changed the way we call people.”

Ma’s TTYL app allows users to see when their friends are free to talk—eliminating that feeling of being “rude”. People can have a “room” open for others to join or lock it for privacy. TTYL has a design optimal for small close groups—only people users would want to hear from.

“What our app allows you to do is in a single tap, jump into someone’s ears and start a conversation,” Ma said.

Another app, Chalk, lets users combine a text chat with the ability to switch to a voice conversation, The Wall Street Journal reports. Users can go into listen-only mode where they can hear everything, but can’t respond via voice. Instead they can text a response or turn their microphone back on. The idea is to decrease how long it takes to toggle between communication methods.

Does Your Building Have the Wireless Bandwidth?

What does a potential voice over phone evolution mean for CRE? Well, if apps like TTYL and Chalk become a more prominent communication tool, especially in the workplace, CRE owners will have to have a wireless network in place that can accommodate it. It’s one thing to have enough wireless bandwidth to handle cell phone calls and standard text messages. However, it could be quite another if a majority of tenants are relying on voice messaging and video chats are their primary communication source.

For example, seed-stage venture capital firm Betaworks Ventures recently announced an 11-week Audiocamp. The camp includes mentorship and funding for startup companies that focus on audio, according to The Wall Street Journal. The firm invested in Yac Chat, an audio messaging platform for remote workers. Users can send and receive voice messages similar to how instant messages transmit, but people can listen to the message when they want. Betaworks partner Peter Rojas believes voice messaging is a better fit for the workplace.

“Most people don’t want to be on a conference call all day,” he told The Wall Street Journal. “You have to balance the things that are special and better about audio with the things that are annoying. If you have never really spent a lot of time using phone calls, your relationship to audio is going to be different.”